Time to get statistically significant data

You are here:
DataDigital Marketing 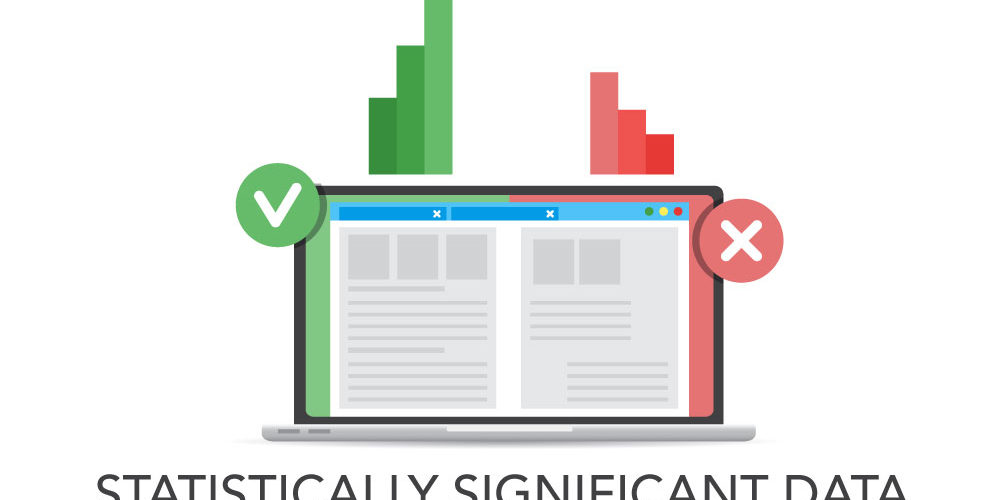 What is statistically significant data?

One of the very first things I learned while working at Social Fulcrum in South Boston, MA was the importance of statistically significant data in marketing and advertising. I have always understood how to calculate conversion rates and find the better performer but I was unaware of this “stat-sig” concept. Here is how Investopedia defines something as significantly significant:

Wait, what? Ok, here is it again in normal-person English:

Uhh, ok. Let’s be honest, that can still be a bit confusing. Here is my version of how it was explained to me:

Say you were doing an experiment to see if quarters, when flipped in the air, are more likely to land on heads than tails. After flipping the coin ten times you get the following results:

Heads converted better than tails. Eureka! Heads is the winner, right? Would you be confident enough to bet $1,000 on the next ten flips that heads would be the winner again? Probably not. There is just not enough data to say that we would expect a similar outcome if we ran the test again.

Let’s say you have a lot of time on your hands and you flipped the coin one million times and the results were the following:

Heads converted better than tails again but this time there is enough data to confidently say that heads is the statistically significant winner and will continue to convert better than tails.

Quick side note: the coin-flipping example is just a simple example of how statistically significant data works; it is not meant for applications for randomization and games of chance. We’ll get into a real-world scenario in just two seconds.

How is statistically significant data used for marketing?

Statistically significant data is critical in marketing because it gives us 100% certainty that the information being used for optimizations and data-driven decisions will improve conversion rates moving forward. Statistically significant data has a multitude of applications in marketing and one of its most common uses is for A/B Testing. For those of you who are unaware of A/B Testing, it is when you test two similar components (e.g. audiences, landing pages, etc.) and change one thing to see if one variant will outperform the other.

For lead generation campaigns (Facebook Ads), I am constantly running side-experiments to ensure that we are targeting the right audience to acquire the cheapest and highest qualified leads. My most recent test is to learn if a lookalike audience made up of Lead pixel events will convert better than a lookalike audience made up of Purchase pixel events. My hypothesis is that the Purchase audience will perform better because these users have shown interest in the product. Here is the latest data:

The lesson of this scenario is that you need to wait until there is enough data to make statistically significant decisions regardless of how obvious the trend might seem. But what happens when you are testing a variety of variants and you cannot get a significantly significant winner? Here are a few scenarios where it is ok to end an experiment early:

There are going to be some scenarios where there is not enough data to have a statistically significant winner. One of the best examples is a startup running A/B tests for their newsletter that only has 100 subscribers. If you get stuck in a scenario like that, I recommend that you expand your test across several campaigns with a specific theme and compare the overall data.
In summary, statistically significant data is one of the best ways to ensure that the changes you are making to your marketing strategy and sales funnel will put you in the best possible chance for success.

Do you need help figuring out if your data is statistically significantly? Here at Perfect Pixel Marketing, we use proven marketing tactics and data-driven strategies to drive the best possible ROI for our clients. Send us a message and we will help you get on the right path to success.

Justin Adelson is the Founder & CEO of Perfect Pixel Marketing; he has proven experience in digital advertising, SEO, email automation, and marketing strategy.

How Freelance Writers Can Be the Best Investment for Your Marketing Dollars
July 10, 2017

This site uses Akismet to reduce spam. Learn how your comment data is processed.